Most years, my family likes to head south to warmer, drier climes as the Montana winter lingers on. We often end up in southern Utah since we can drive there in a day and it’s likely to be dry, if not warm.
Melynda Harrison

Most years, my family likes to head south to warmer, drier climes as the Montana winter lingers on. We often end up in southern Utah since we can drive there in a day and it’s likely to be dry, if not warm.

This spring was no exception and we opted to base camp near Kanab, Utah with two other families from home. Because the other families would be rolling into the campsite in travel trailers, we wanted our own RV to complete the wagon circle.

While we had lived in a travel trailer for a summer, we’d never driven one around and camped. Renting an RV through Outdoorsy gave us a chance to comfortably spend time with friends in nature and try out the RV lifestyle.

We already knew we wanted to stay in southern Utah and the three families agreed that we’d prefer camping on Bureau of Land Management land. These public lands are both abundant and free in southern Utah.

There are several RV parks in Kanab and Mount Carmel Junction where we could have hooked up, but we liked the remoteness of a BLM camp and the cost (free). That meant boondocking.

From previous trips, we knew there were plenty of great sites for RV camping between Mount Caramel Junction and Kanab.

There are a couple of ways to find a campsite once you narrow down the general location. We like apps including Campendium, FreeRoam, and The Dyrt. It’s easy to search for dispersed camping sites, campgrounds, and RV parks. Sometimes we match the locations found in one of the apps to Google Earth to get a better idea of what the spot looks like, which is nice if you want to know how much backing in will be required.

Another option is to grab a state atlas and look for sections of public land. I still like to check out those spots on Google Earth to get a better idea of what the driving and parking conditions look like.

We kept our RVs in the same spot for seven nights since it seemed a little crazy to move around trying to find new spots with three RVs during the busy spring break season. Plus, without having to pack up in the mornings, we could get a move on the activities that drew us to Utah — or just hang around the campsite.

We were only a couple miles from a service station in Mount Caramel Junction where we could dump the black and gray water, refill freshwater, and refill propane tanks. There were several spots down the road in Kanab to do the same.

When looking through Outdoorsy for the right RV to rent I considered two things: First, it had to be something we could drive as we wouldn’t be bringing a vehicle to tow a trailer. Second, we wanted to get as close to the campsite as possible before picking up the camper. Most rentals have a limit on the number of miles you can drive per day (100 miles/per day seems to be pretty standard) without paying extra.

We also needed to sleep four people as we had our two teens with us. And we wanted it to be easy to drive.

I found a 23-foot motorhome in St. George, about 80 miles from where we intended to park it for a week. Perfect.

When we met the owner at his house to pick up the RV, we spent about an hour going over the vehicle. He made sure we knew how to operate everything, how to dump and refill, and how to troubleshoot issues that may arise. We filled out paperwork from Outdoorsy and both parties initialed that everything was in order and we were fully educated. We recorded mileage and generator readings.

As we went through the process of getting to know the RV, I took photos to upload to the Outdoorsy website. While we fully trusted the owner and he seemed like a fair, honest person, the photos insured we would not be responsible for any damage sustained before we took it on the road.

Outdoorsy also requires that you buy some level of insurance through their site. The owner we worked with required the highest level of insurance. It was more expensive, but it would have covered almost anything had there been a problem.

The RV came with kitchen items, bedding, towels, an outdoor table, movies, and more!  Other than clothing and food, we didn’t need to bring anything.

When we returned the motorhome, we did a quick walk-through with the owner. He checked the mileage and generator numbers, made sure everything was there, clean, and in the same shape as when we left. The return only took 15 minutes.

There are so many things to do around Kanab for the outdoor lover; that’s why we keep going back. Zion and Bryce National Parks are nearby, as are a few gorgeous Utah State Parks, including Kodachrome State Park and Coral Pink Sand Dunes State Park.

There were a couple of trails for walking and biking that left from the dirt road where we were camping. Mornings and evenings were spent around the fire, along the East Fork Virgin River that ran past our site or exploring local trails.

You can’t visit southern Utah without exploring at least one slot canyon and we wandered through three — Peekaboo, Diana’s Throne, and Buckskin Gulch. It is important to have the right vehicle for driving on very sandy roads (Peekaboo) or route-finding skills (Diana’s Throne). To hike through Buckskin Gulch a permit is required but can be purchased the day of at the trailhead or the night before online.

When we weren’t sliding through slot canyons and marveling at how intensely water can shape rock, we went for a few hikes. The Dragon’s Belly Trail winds up a wash past countless cairns and to a red rock cathedral. The Panorama Trail at Kodachrome State Park led us past the most amazing rock formations I think I’ve ever seen.

While in the Kanab area, it’s fun to visit  Best Friends Animal Sanctuary, home to 1,600 rescued dogs and cats, horses, birds, rabbits, potbellied pigs, farm animals, and assorted wildlife. Make a reservation to take a tour or hike out to the nearby Hidden Lake Recreation Site on your own. 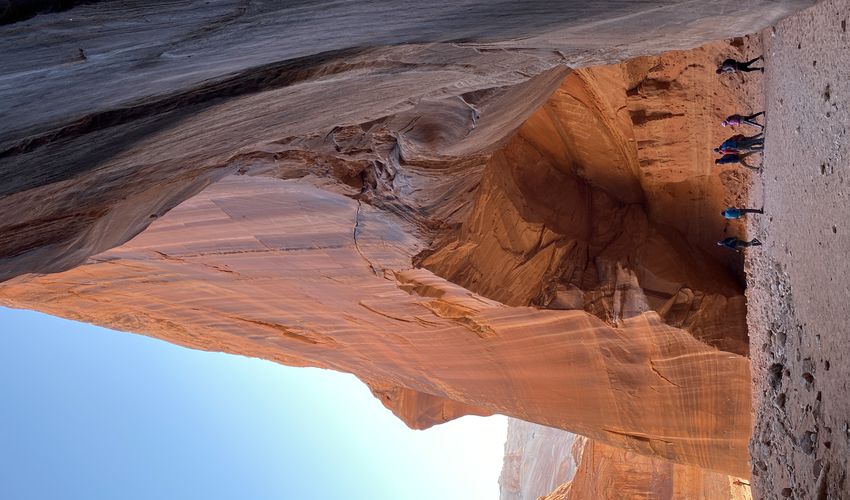 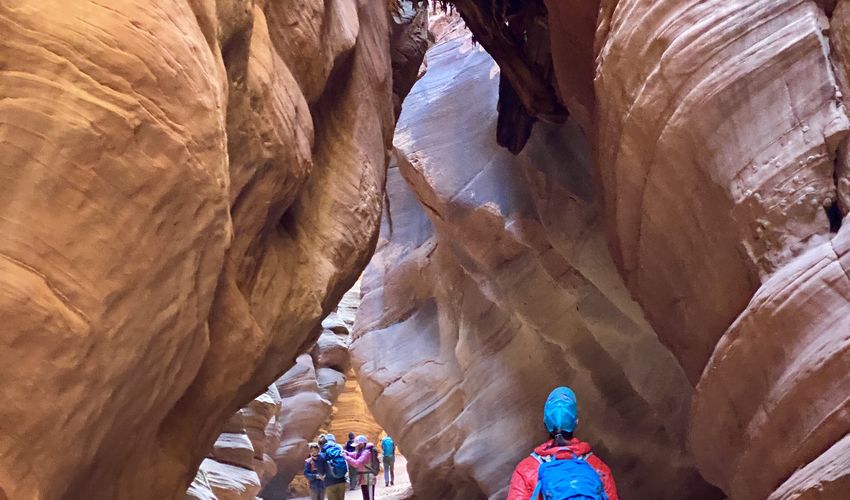 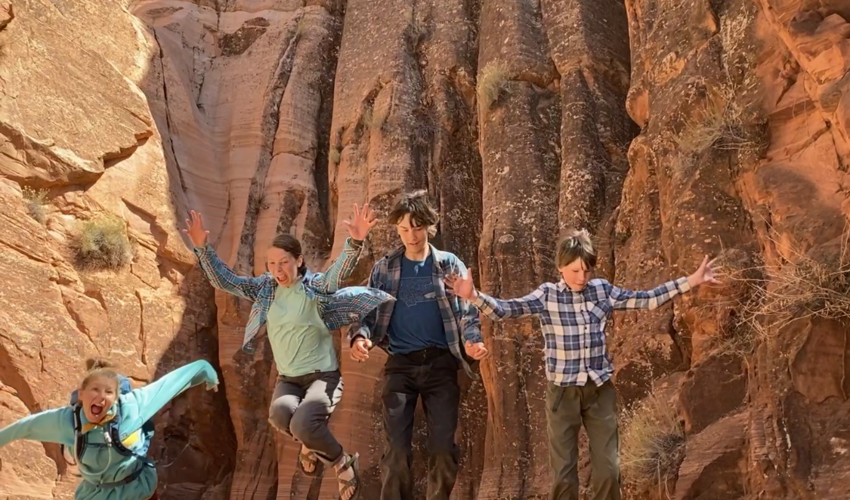 The best part about a trip like this is, of course, the people. Our friends were present, as were our kids’ friends. We’d break up into smaller groups for short walks, playing in the creek, and board games in one of the RVs.

In the center of the three-camper circle were the campfire stoves (yes, we each brought one!). This is where we gathered to talk, laugh, and plan activities. And, it’s where we cooked most of our meals.

Everyone’s favorite dinner was pudgy pies. Pudgy pies are hot sandwiches or pot pies cooked in a pie iron in the fire. One popular recipe was pizza sandwiches — white bread smeared with pizza sauce, plus mozzarella cheese and optional pepperoni. Roasting them in the fire produced golden, buttery bread filled with melted cheese and pizza sauce. The pesto version was great, too. Follow pudgy pies with s’mores for both pure bliss and sweet dreams!

Despite getting out every day, we still have a long list of hikes, bike rides, and other adventures for our next trips!

Melynda is a writer and naturalist who shares her experiences and advice about her time spent on the road with her husband and children. TravelingMel is a leading family travel blog focused on providing useful information for families who travel with children. They present the best accommodations, attractions, and outdoor activities in each area they visit to inspire other families to plan their own adventures.

10 of the Most Accessible Places to Visit in the U.S.

If you are looking for truly inclusive and wheelchair-accessible destinations, where you can unwind and fully enjoy everything, here are ten of the best places in the U.S. From accessible beaches to busy cities and unexpected gems, there is a destination for anyone on this list.

Why I Loved RVing - A Guide to Accessible RV Options

RVing on the great American highway is something I’ve wanted to do for years, but I never imagined it would be possible because I use a motorized wheelchair. I’m unable to transfer to a regular seat in a vehicle and need to stay in my wheelchair, so RVing seemed out of reach for a while. However, thanks to more and more companies now making an effort to be inclusive, RVing has never been more wheelchair-friendly!

So you’ve heard a lot about this term “roadschooling“, and you’re interested in getting started but you have no clue if you have the tools to pull this off. You are certainly not alone and that’s where we hope to come to the rescue. We’re here to tell you that with a few essential tools you can jump in with both feet and feel confident in your quest to conquer roadschooling!