Every year I try and hand make gifts for the special people in my life. There is such a temptation to just log on and “swipe” a gift to the friends and family on your list but I feel that the old fashioned sentiment of offering good cheer is lost in that transaction. This year I went old school with my Girl Camping friends and made each a bucket of fire starters. After all, sitting around the campfire with these women is just about my favorite thing. Here are a few of my offerings.
Janine Pettit

The dried leaf and flower bouquets.

You will need: Branches with dried leaves on them or dried flowers, melted wax, parchment or brown paper for wrapping the bouquet and string to tie it.

The basis for most fire starters is wax and that’s what I am using. I started by gathering all the old candle stubs, birthday candles and flea market and garage sale wax finds I could get my hands on and placed them all in an aluminum disposable pan. I placed it in a 300 degree oven at home and melted the wax. Don’t go too high with the temperature and get it out as soon as it is melted.

I gathered fallen branches that had lots of dried leaves on them. I added to this a good pile of dried roses that I had saved over the course of the year. When I see that a bouquet of roses is about to droop I tie them up and hang them upside down to dry.

I dipped each branch of leaves in the wax and placed them on a sheet of waxed paper to solidify. I did the same with the roses. I then wrapped them in parchment paper and tied them up as pretty bouquets. The whole spray can be paced in the fire to help get it started. 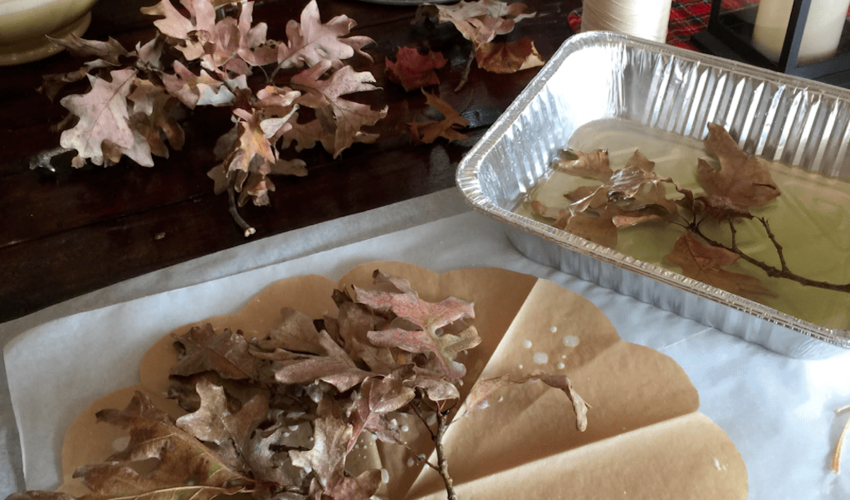 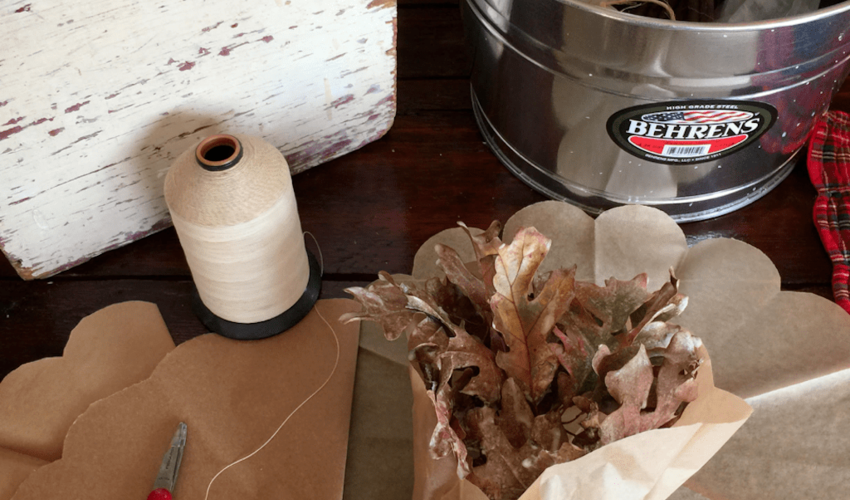 You will need: A roll of brown craft paper that is about 18 inches wide, petroleum jelly, a spoon, twine and a sprig of greenery to embellish.

I thought a Christmas wreath would make a nice addition to the bucket for a seasonal gift. I bought brown craft paper on a roll and cut the pieces at about 30 inches each. The paper is about 18 inches wide. I then used the back of a spoon to add a line of petroleum jelly to one edge of the paper.

After applying the petroleum jelly,  roll the paper lengthwise and then twist it. I tied three twisted pieces together and tightly braided them. I connected the ends to form a circle and added a sprig of green and some rose hips from my rose bushes. You can toss the whole wreath in the fire and it will burn for quite a while thanks to the petroleum jelly. 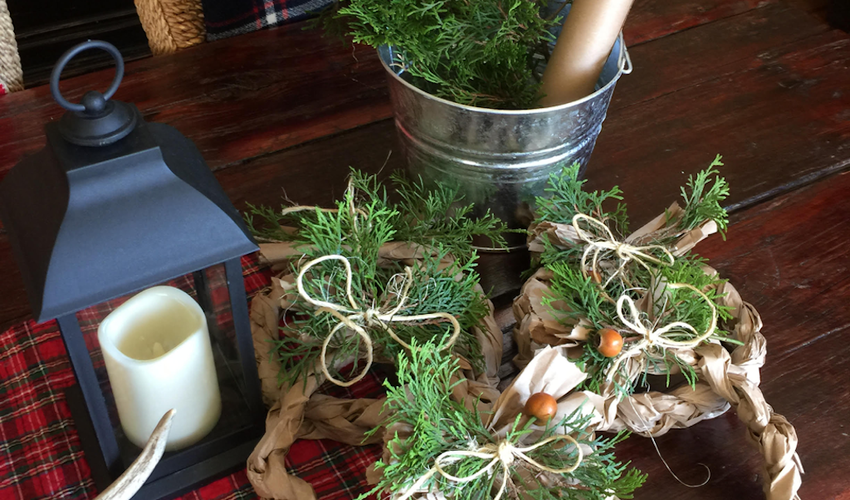 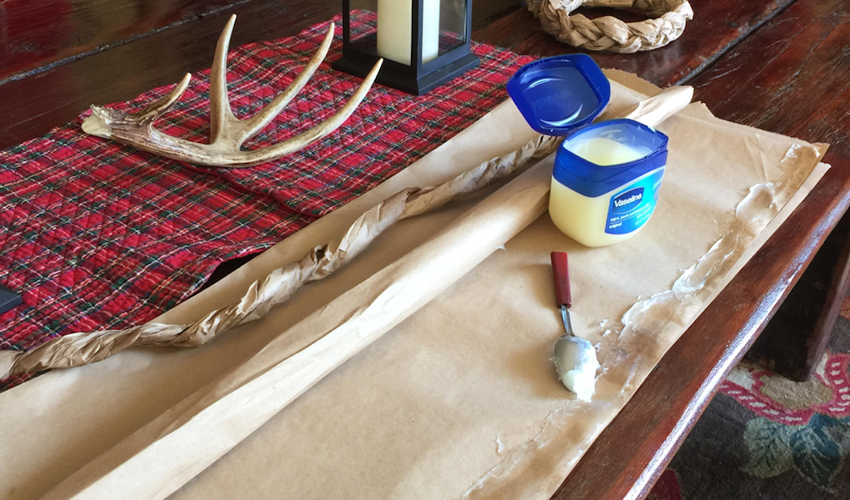 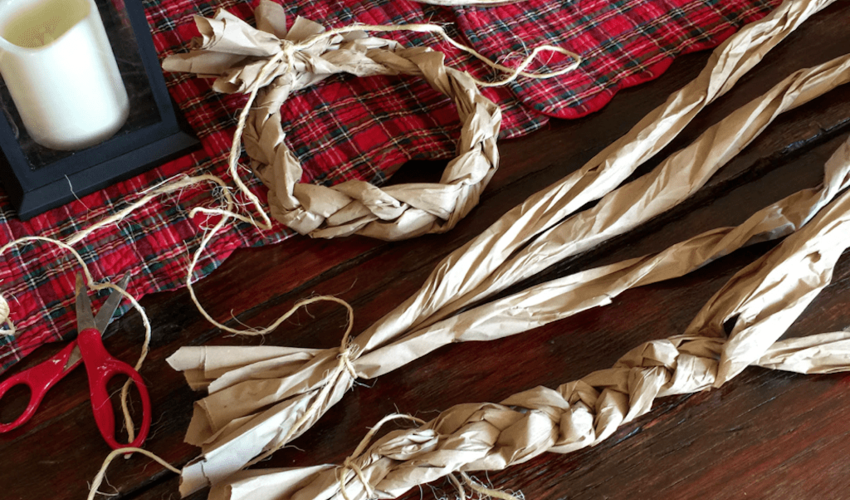 On my last campout of the season I walked around the campground gathering the big pretty fall leaves. I individually dipped each one in wax and placed them on brown paper to dry. I gathered them in piles of seven or eight and put them in brown waxed paper lunch bags that I found in the supermarket. To add more burning power I folded over the top and made two cuts. I secured the bag with a straight dried stick that I cut to size and dipped in the wax. 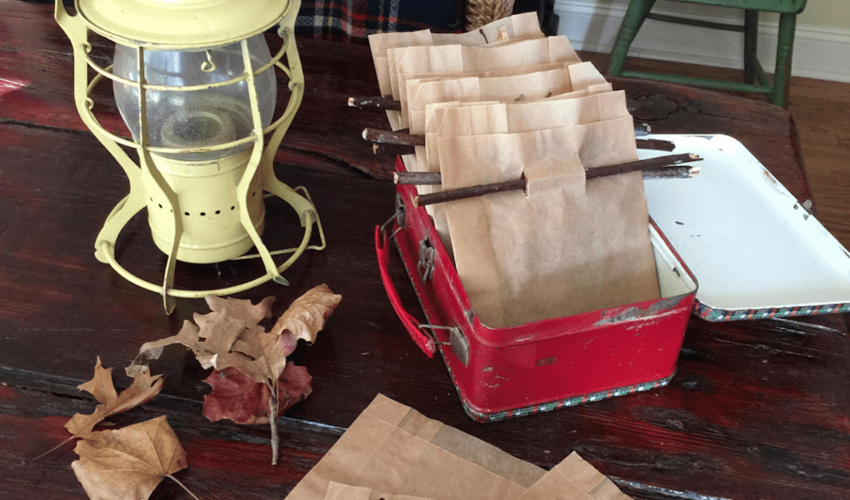 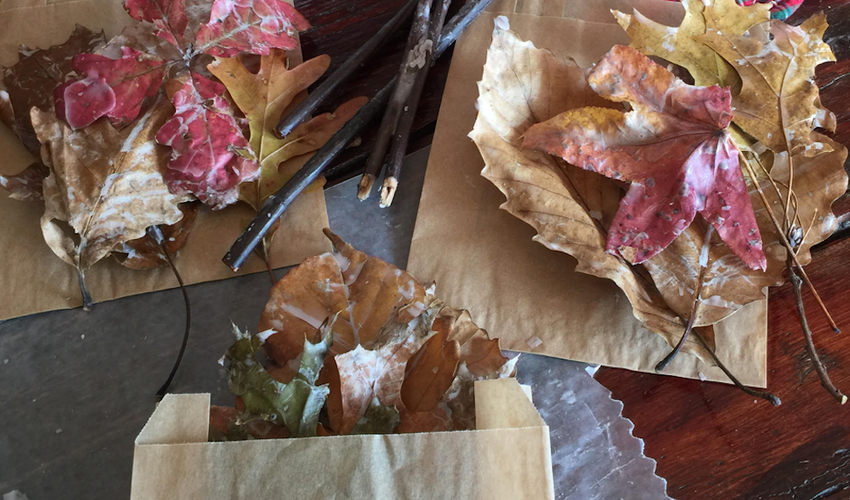 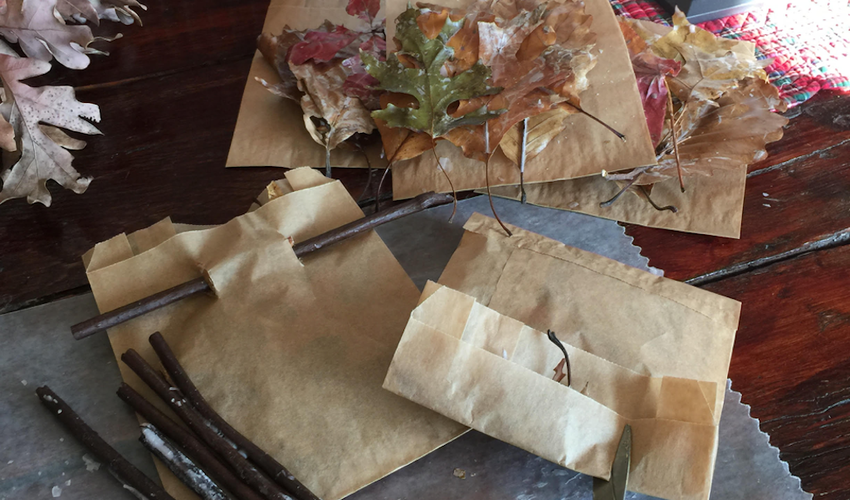 Cardboard food boats, dry pinecones, melted wax, crinkle cut paper or torn newspaper for the bottom of the boat, waxed paper and string to tie it up.

On the same campout I was lucky enough to be in an area heavily wooded with evergreens. I grabbed a bag and picked up all the pinecones with branches still attached to them. I dipped them at the campground after heating up the wax on the edge of the fire pit. You can reheat the wax over and over. I found cute cardboard boats meant for cakes or cookies and I added a heaping tablespoon of the melted wax and crinkled paper to the bottom of the boat.

I placed all the dipped pinecones on top of the paper and wrapped the whole thing in waxed kitchen paper and tied them with twine. You can toss the whole boat in the fire. 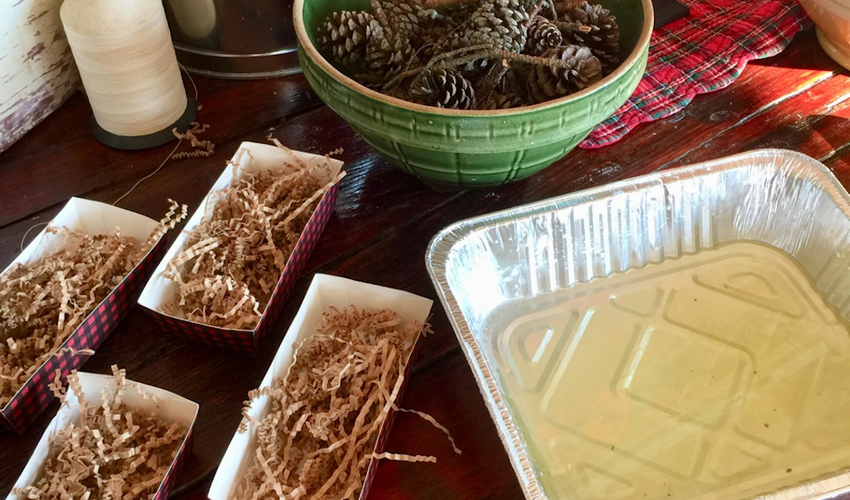 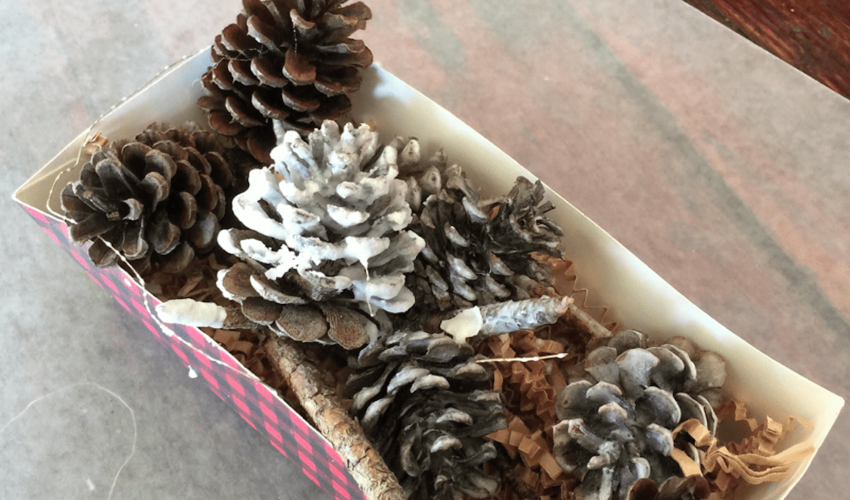 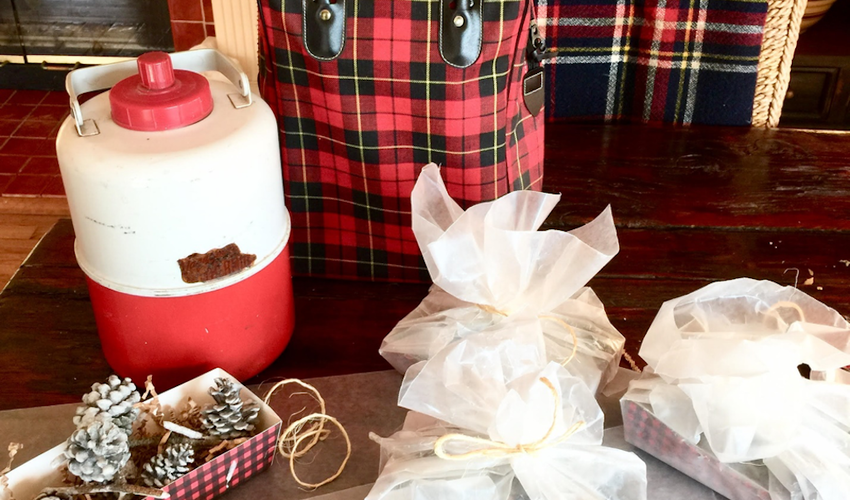 This is a little “twist” on the classic Christmas poppers. I cut paper towel and toilet paper rolls into small (about 3”) circles and lined them up on a piece of waxed paper. I added a small amount of lint to the bottom of each and then placed the wax from a tea light candle the metal and wick removed on top of the lint. I topped it off with more lint and then rolled it around in the melted wax.

I precut the parchment paper about 7 inches wide and rolled up the dipped cardboard and lint while it was still very hot. I twisted the ends in opposite directions and held it for a moment to set. The oozing wax held the ends closed so no string ties were necessary.

Do you use firestarters? 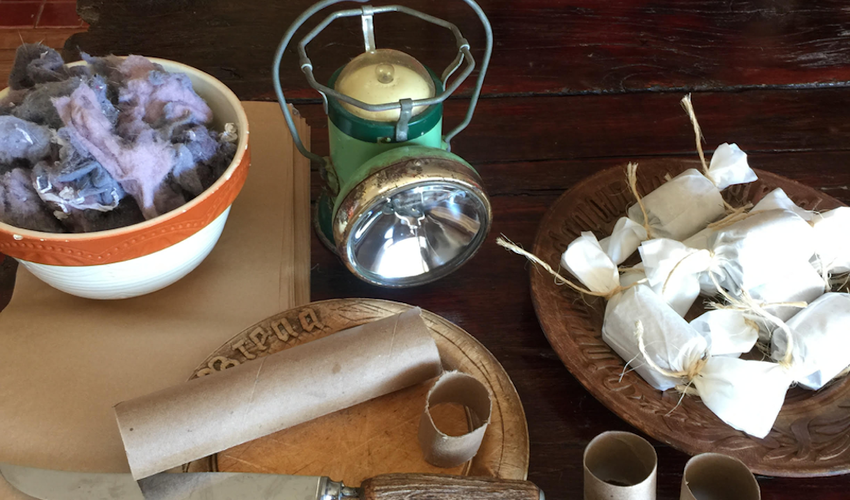 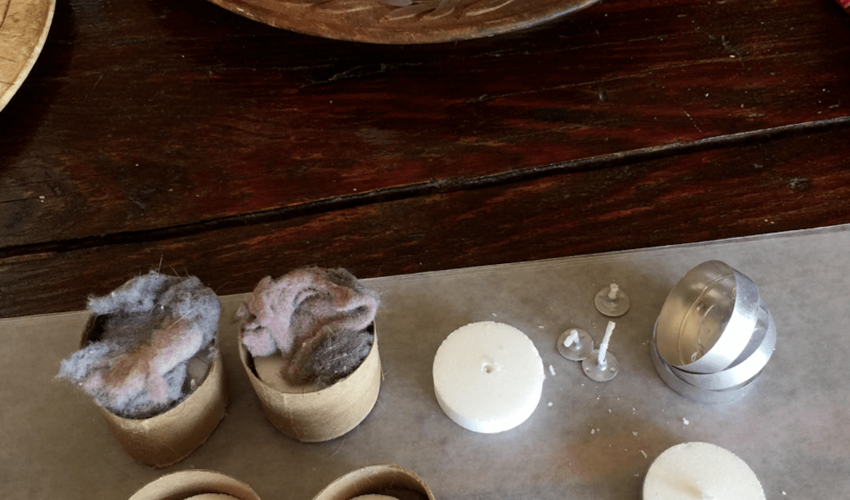 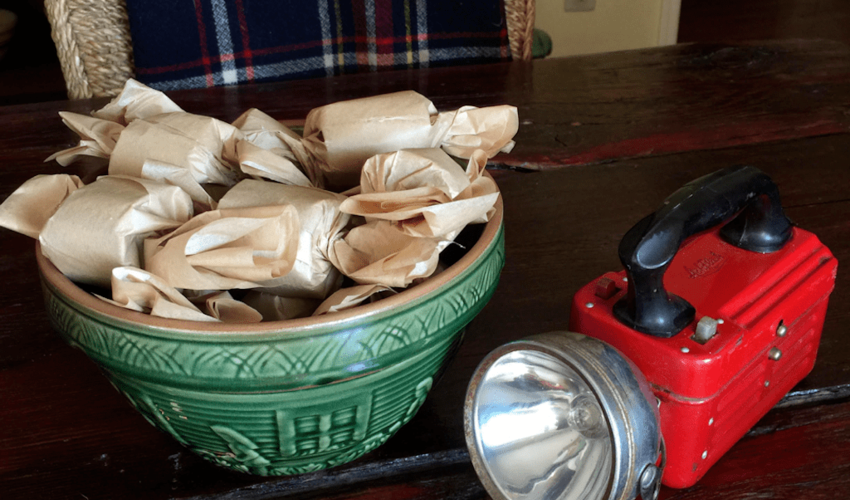 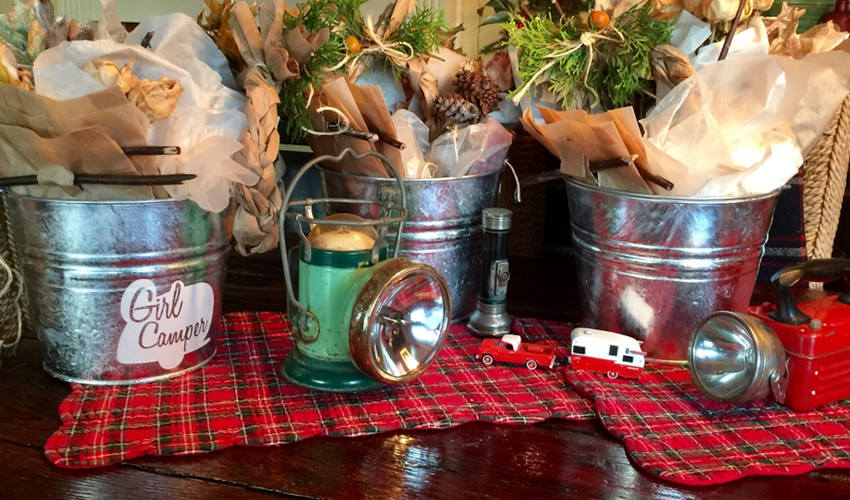 Janine Pettit is a lifelong lover of camping who took a 25 year sabbatical when she married a “resort” type guy! She discovered that camping was still in the cards for her when she stumbled onto an article about a women’s outdoor adventure group that travels around the country in RVs, meeting new friends, checking off bucket list adventures and doing things she had only dreamed of. Janine has become an Ambassador for the Girl Camping movement and encourages women to go places and do things in her blog and podcast.

Jesse and Lauren Stuart share their tips for using solar panels on your RV.

9 Must Know Safety and Travel Tips for RVing With Dogs

Jesse and Lauren Stuart share their safety tips for traveling with dogs.

A Day in the Life of An RVing Dog

Meet Huey, a scruffy dog who loves RVing with his humans! Here's a little bit about Huey's life as an RVing dog.