Exploring A Different Side Of Memphis

If I say the words “Memphis, Tennessee”, what are the first things that come to mind? For many, we are sure Graceland, the home of Elvis Presley would top the list. For others, Memphis is definitely known as a great place to get incredible barbecue. Both of those are true and as we headed to Memphis, we wanted to see some of the best-known sites, while experiencing some of the lesser known must-see sites. All of this is from a local’s point of view. The only problem was figuring out where we would stay. This can be one of the most important decisions you can make when selecting a campground close to a major city.
Keith & Tia Sims

Picking the Right Campground – Home Base

We knew we were going to be spending 4-5 days in the Memphis area and picking a solid campground would be key. Our “homebase campground” is a huge factor in the overall enjoyment when visiting cities. This time we chose the Memphis Jelly Stone Campground, which just happened to be located in the state of Mississippi, go figure.

That’s because the Mississippi state line is just outside the city limits of Memphis. We knew with our frequent daily excursions, having a kid friendly campground would be the key to keeping the entire family happy. We learned a long time ago that just piling the kids up in the car and touring sites without factoring in plenty of fun time is a recipe for disaster. That’s especially true if we planned to hit any sensitive museums. Once we chose the Memphis Jelly Stone, we showed the kids all the things to do at the campground and they were 100% on board. Being that it was July, we knew it was going to be hot.

This Jelly Stone had a nice pool, water slides, gaga ball, tether ball and even a basketball court.

Not to leave out Ebony, it had multiple “off leash” dog parks, one even lakeside! So with everyone happy with our homebase, it was time to venture out and explore Memphis. 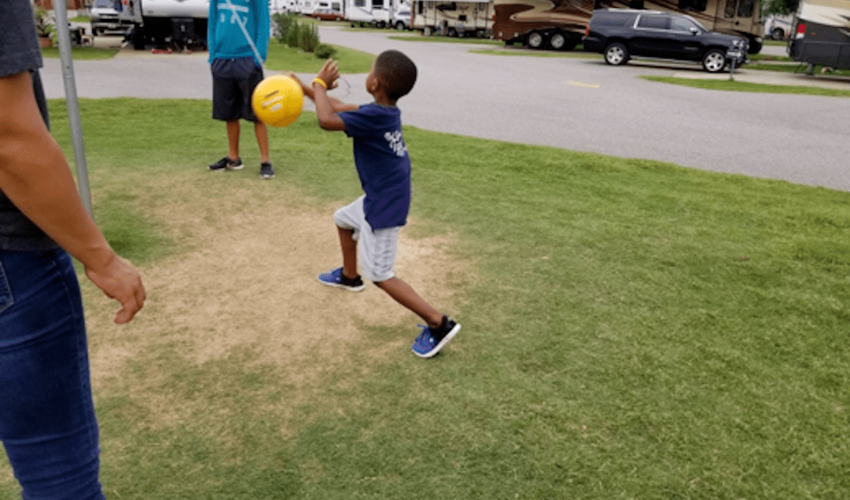 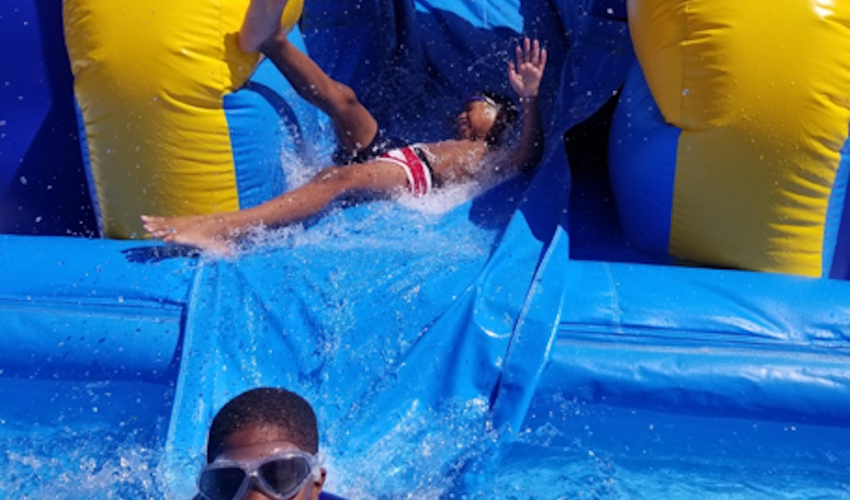 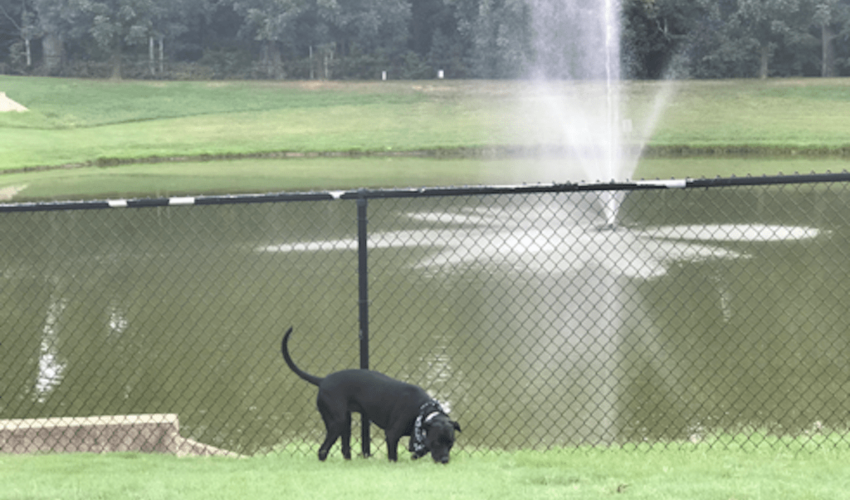 With this year marking the 50th anniversary of the assassination of Martin Luther King, it was very important for us to take time to visit the National Civil Rights Museum in Memphis.

For those who don’t know, this museum is actually formally known as the Lorraine Motel, and it became a national site to remember and preserve the last days in the life of Martin Luther King. We always make it a point to try to visit national historic sites, museums, and landmarks wherever we travel. But this site in particular with the 50th anniversary year was going to be a special visit, and it did not disappoint. My advice to you would be to plan at least a two-day visit at this museum. There’s so much to see and to absorb.

We have made it a point as we homeschool our boys to expose them to as much American history as possible, and that includes African-American history. Sometimes easy to separate, but it really should not be. This museum did a phenomenal job of covering not only the impact that Martin Luther King Jr. made on this country, but the key moments and facts of the civil rights struggle from generations ago to today.

I would say the most striking moment from our entire visit at the museum was as we passed from exhibit to exhibit and our boys said more than once, “Mom! Dad! We’ve been there.” Whether it was the replica of the Edmund Pettis Bridge from Selma, or the market lunch counter from the Greensboro, North Carolina lunch counter sit-ins.

We have taken our boys to these locations, and it’s not always easy sometimes, they’re scared. Sometimes they’re confused struggling with the question of why people would treat us like that. But our resolute determination is to expose them to things that are in their best interest and to hear them say to us that they remember visiting many of those places are priceless moments and experiences while RVing. 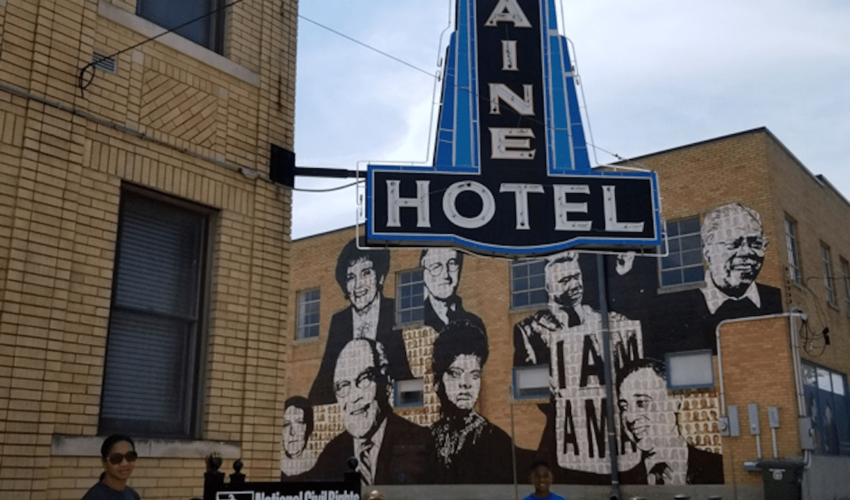 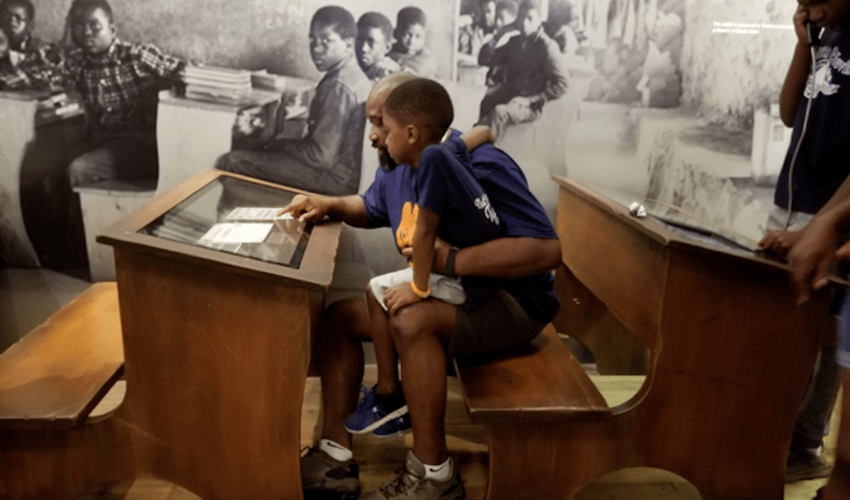 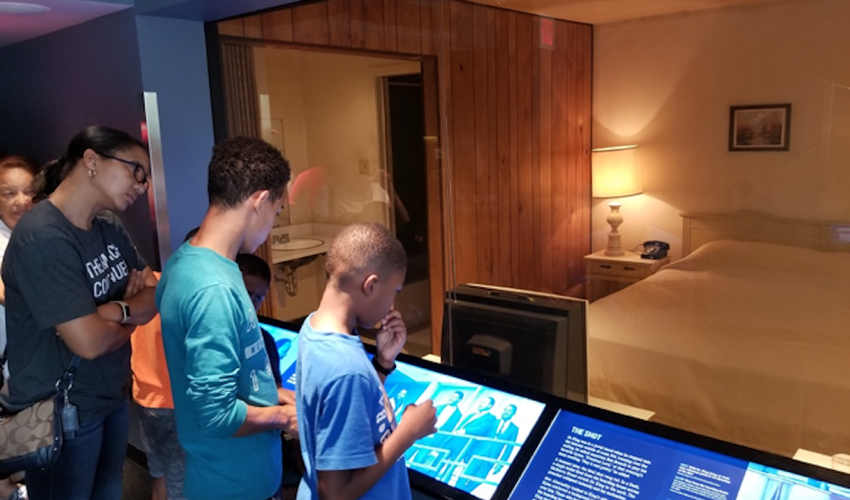 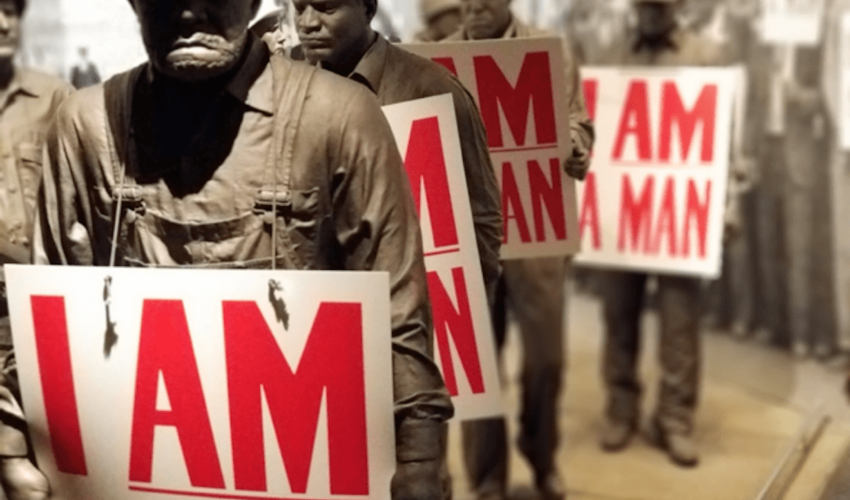 On a lighter note, we heard we just had to go check out the Bass Pro Shop Pyramid. No, we didn’t do a lot of research, so we had no idea what to expect.  As we drove nearer, in the distance we could see this pyramid reach up into the skies.

I’m going to say that this place was pretty cool. You can take this unique elevator to the top observation deck. It changes colors every few minutes. There is a $10 fee per person to ride up.

And the view from the observation deck on a clear day/evening was worth the fee (for at least one person). Inside there was an aquarium fish tank that even had live alligators! Also, if you needed anything, and I mean anything for your camping trip, they had it.

We didn’t have a chance to eat at the on-site restaurant (due to a long wait), but we heard good things about it. 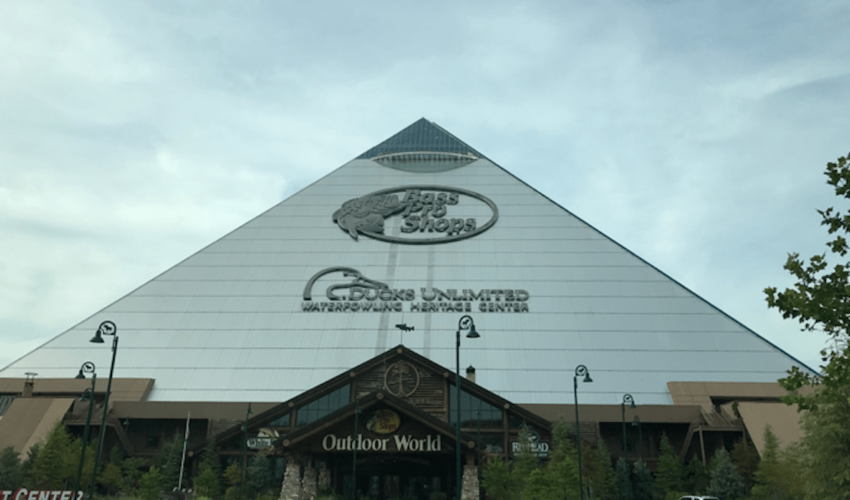 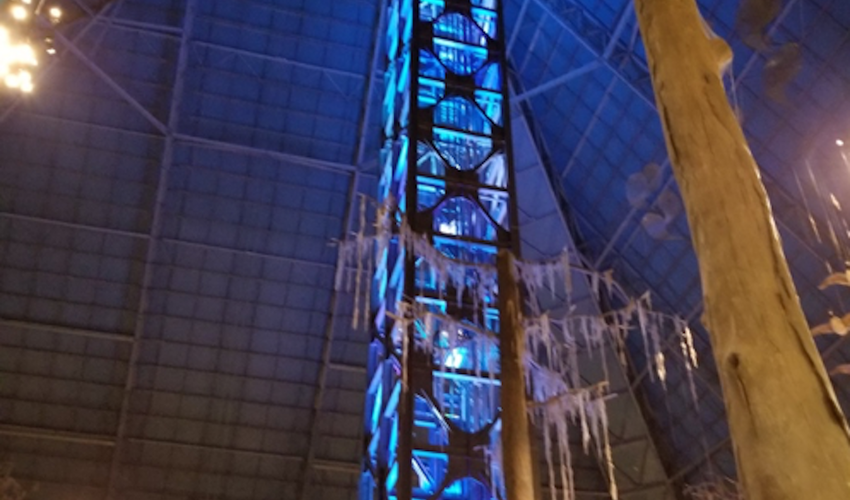 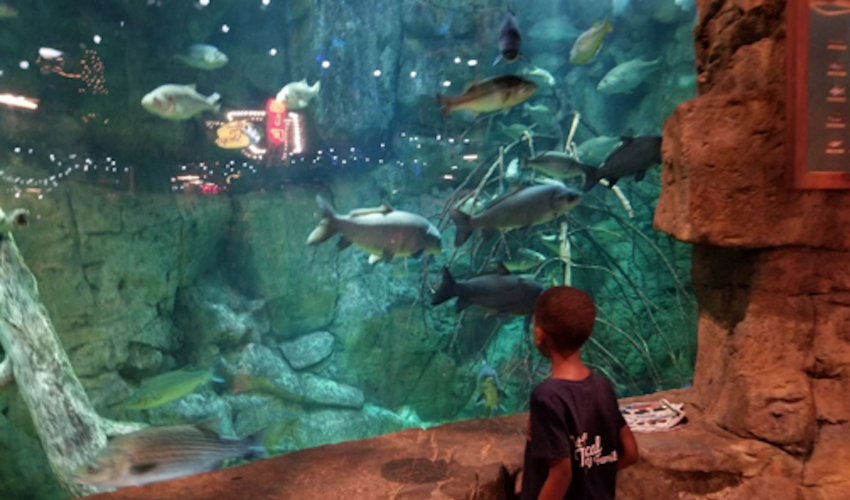 We had planned to visit Graceland, but then decided to check out maybe a slightly lesser known, but important musical history site, Stax Records.

Second only to Motown, Stax Records place is cemented in American Soul music history. Artists such as the Staple Sisters, Dramatics, Isaac Hayes and Otis Redding launched their careers in the studios of Stax. Stax Records and Southern Soul music were one in the same. 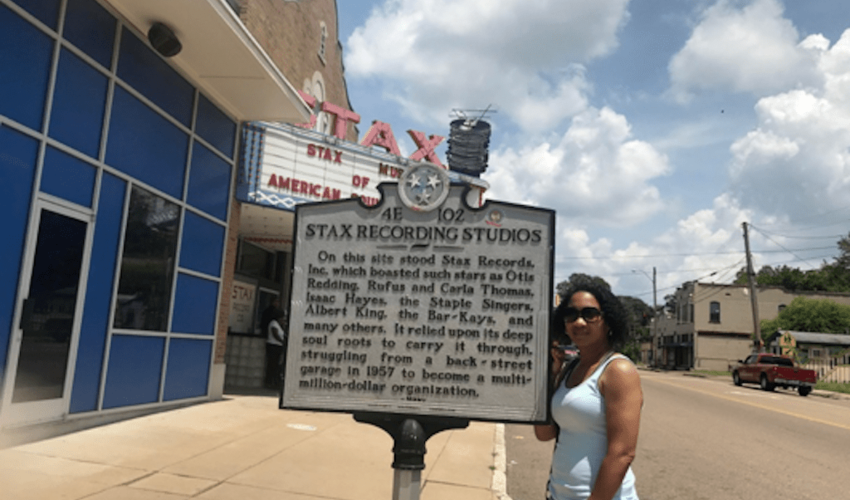 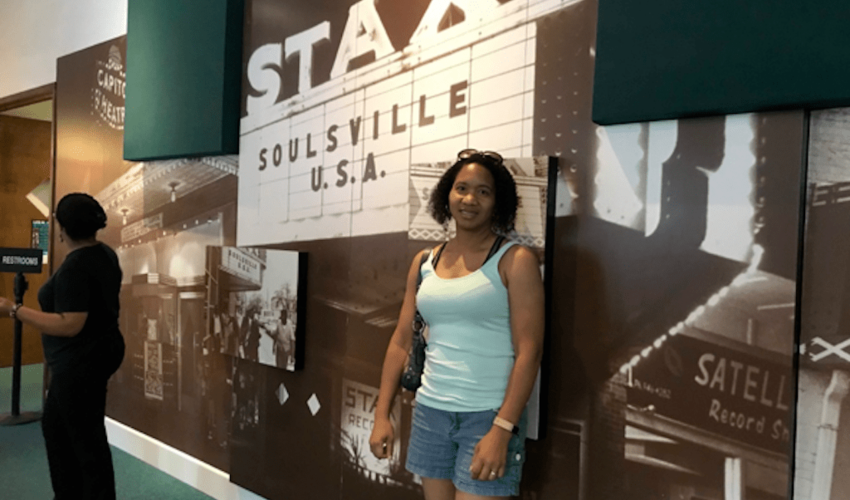 Time to Eat – Memphis BBQ Anyone?

Memphis is known as a place to get top BBQ, but how in the world do you choose where to go?

One of the things we have learned most in RV travel is to ask locals the best place to eat. Tia has a girlfriend that grew up in Memphis, and she said the well-known places are good, but if we didn’t mind going to a different part of town, we would find even better BBQ. So we did and went to Central BBQ.

I was worried since Tia has become a vegan that she wouldn’t be able to eat, but she loved the BBQ portabella mushroom sandwich. The kids loved the homemade mac and cheese. I wanted to taste a few items.

So I started with the jerk and dry rubbed wings and ended with the slab of baby back ribs. This place didn’t disappoint! 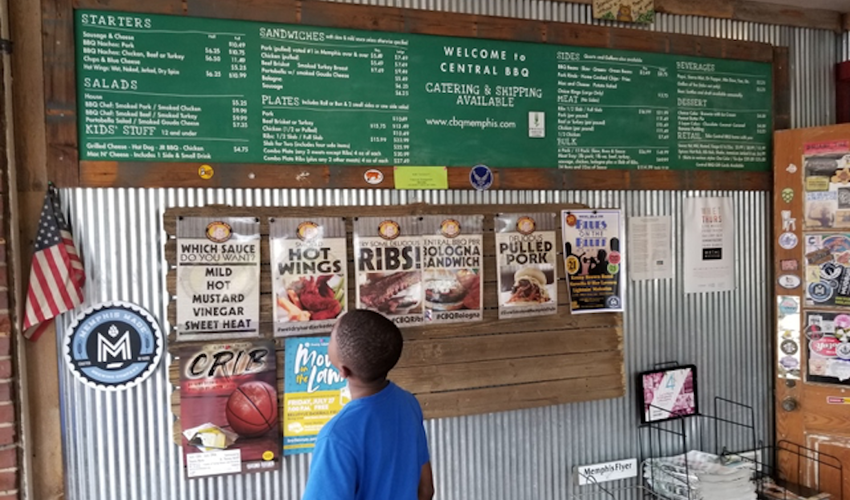 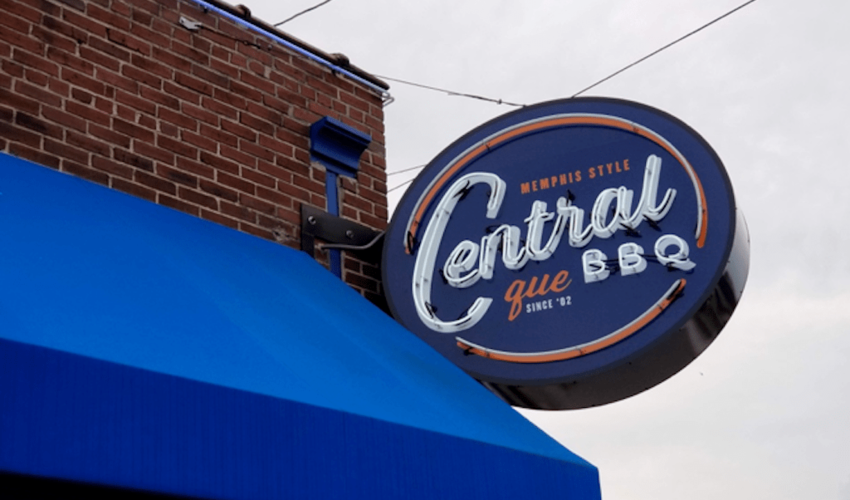 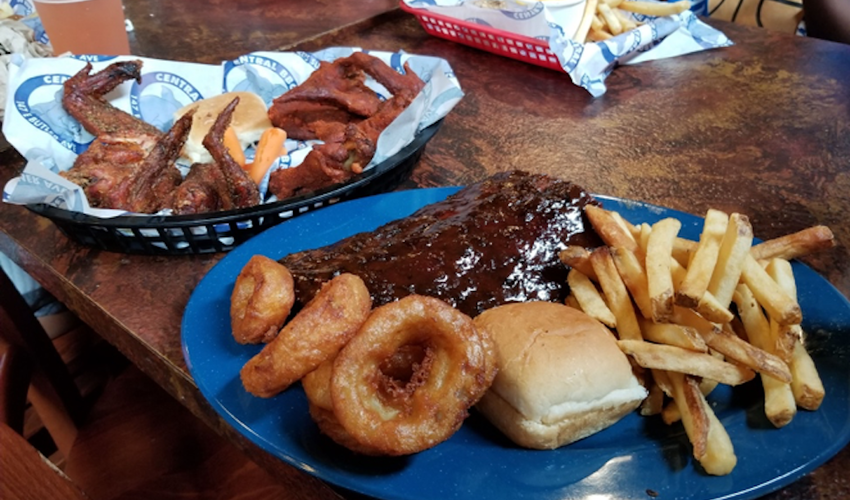 Memphis is a fun history filled place to visit. You may be drawn there to visit because of Graceland, and there’s nothing wrong with that, but Memphis has so much more to offer. I know we only scratched the surface of things to do and see in Memphis.

So if or should I say, when you go, plan wisely, eat local recommendations and take in a few of the sites we visited. The history will draw you in and the food and music will keep you going back.