When Brewster, NY native Danielle Thompson decided she wanted to be an RVer, she tapped into her “can do” family attitude and dove right in. A CPA by trade in her family’s historic NYC construction business, Civetta and Sons, Danielle is used to “big deals.” She is the third generation to work at the business started by her grandfather that has had a hand in some of the biggest “digs” in NYC, excavating for the buildings that silhouette the Big Apple’s skyline.
Janine Pettit

Growing up with her older sister and younger brother, she recalls a camper they owned being used more in the backyard as a playhouse than for actual camping. Because of the nature of her dad’s business, summer was always his busy season, so vacations with the whole family became winter ski trips in Vermont and Colorado. Her mom, however, thought nothing of throwing all the kids in the station wagon while dad was working and hitting the road. Whether it was Long Island for a day of discovery, or the family favorite “epic” Niagara Falls their mom had the spirit of adventure that Danielle and her sister and best friend Regina inherited. Danielle credits her mom with instilling in her the feeling that she can “do anything and go anywhere.”

When Danielle had her first baby she began feeling the pressure of motherhood, a career, and being a wife to a golf pro instructor. There was always something that needed to be done and juggling all of her responsibilities left her with “mixed up priorities.” It was then that Danielle picked up camping. She says, “When I was camping I was just in the moment. I didn’t care what was going on at work. I didn’t care what my house looked like – honestly I didn’t even care what I looked like. I was just in the moment. I cared about what I had to eat at the next meal, when I got to nap with my daughter and relax. This is what got me hooked.” Danielle began camping with her sister and her now two kids a couple of times each summer and when she did, she said she was so relaxed that the few days she was able to get away felt like weeks.

When the kids got a little older and camping was still a favorite “go to” stress reliever, Danielle decided to purchase a motorhome. Her sister was married now with two small children and would make a great travel companion since her husband also worked a lot of weekends. She had her husband’s full support, though this was really her decision.  He likes hotels, is not crazy about camping, and works summer weekends. What’s a girl who likes camping to do?  Buy a camper and go without him of course. Danielle decided on a Type C motorhome because she thought it would force her to stay put and “be in the moment” and not do too much running around once she arrived at the campground. She used the Type C for two years and in 2014 decided to upgrade to a Type A. She bought a 31’ Newmar Baystar Sport. Despite the fact that her only previous towing experience was driving a John Deere riding mower with a wagon attached to the back, Danielle began towing a Jeep Wrangler behind the Type A as well.  Her two children, Katie, age 12 and Matt, age 10, absolutely love camping. Danielle decided to get them involved in planning the trips so that they would be more invested in the experiences.  Since her son was going to be studying Colonial history in 4th grade she suggested the Sturbridge Village in Massachusetts as a family vacation. At the end of the weekend trip Matt said to his mom, “I want to go on a camping vacation from Saturday to Sunday – I mean the next Sunday! I want to stay at a campground and ride my bike and go to the pool and not leave!” This year the kids and Danielle decided on a beach vacation, so they headed south with her sister and her two children to the Outer Banks of North Carolina. 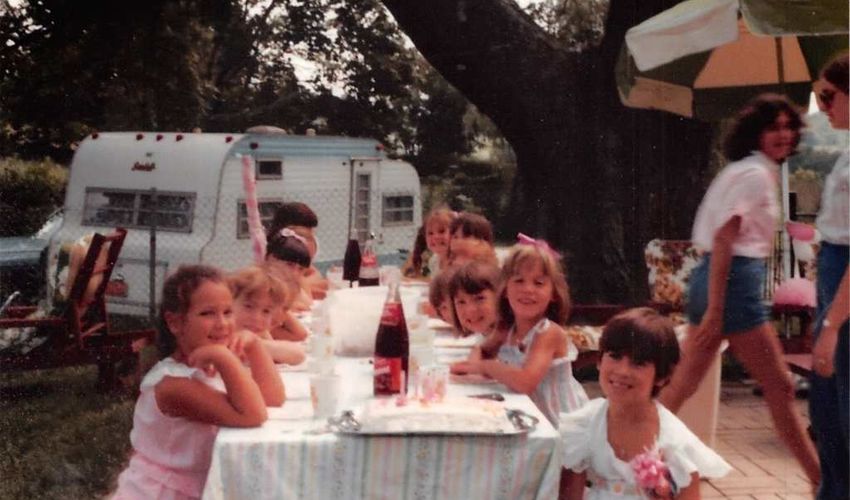 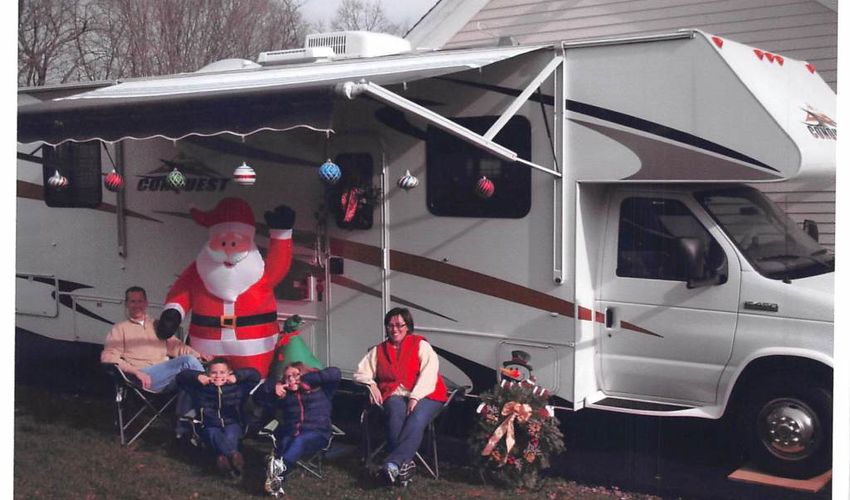 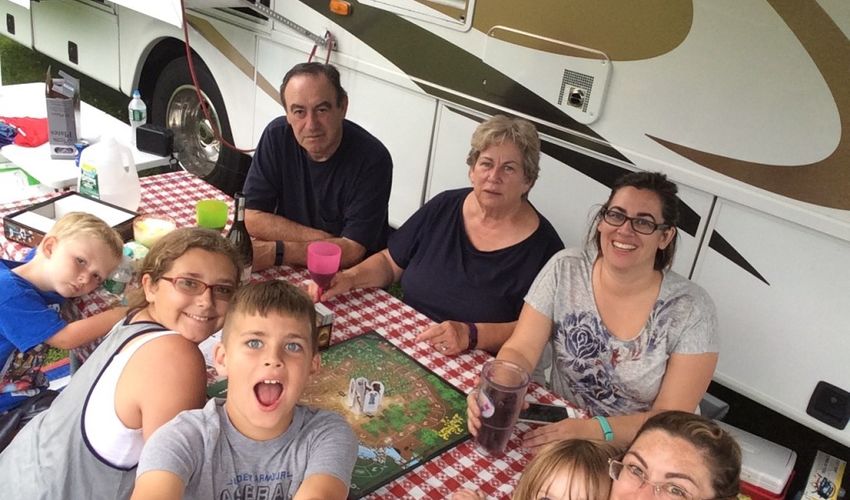 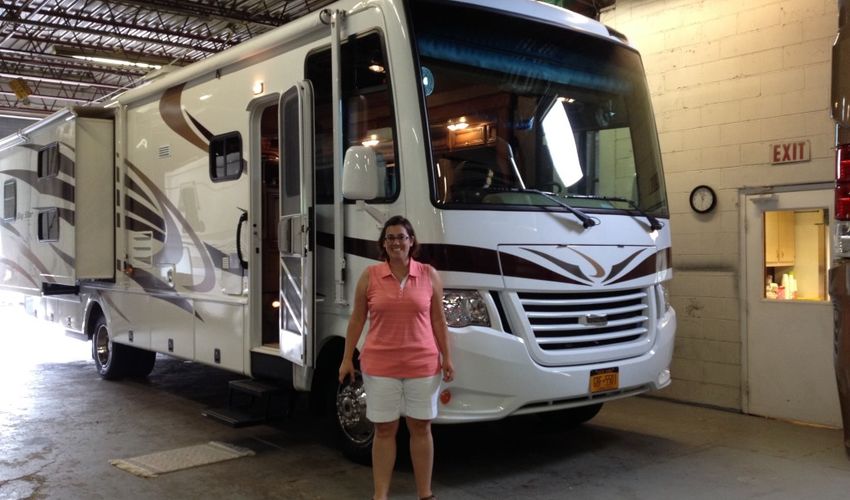 Danielle was empowered by her mother’s fearless example, and enjoys empowering her own daughter to follow in her footsteps. Last Labor Day weekend the whole family, including Danielle’s husband, was scheduled to camp as a last hurrah of summer when they discovered their son’s first football game was on the Sunday of their campout. Her husband volunteered to stay home with Matt and come up after the game on Sunday evening, but Danielle had a better idea. They would commute from the campground to the game and return to the campground after the game. Danielle and her daughter Katie drove the 31’ motorhome while father and son followed in the car, which the family would use to get to the game. As they arrived at the campground and were slowly making their way to their site, Danielle heard a man say, “Wow, look at that Type A – it’s really nice.” She laughed and then heard the man say, “Wow, there’s a woman driving it!” The man’s wife said, “And she has a great big grin on her face!” Danielle’s daughter, riding shot gun high up in the Type A turned to her mother with a laugh and obvious pride and said, “Mom, they are talking about you!” She said it was one of her funniest and proudest moments as a mom, knowing that her daughter was seeing her mom as “adventurous.”

Not all of Danielle’s adventures have come off without a hitch and she credits the dealership where she bought the trailerfor their steady encouragement. She has called on them many times from campgrounds to help her trouble shoot a glitch she is experiencing. She has learned to roll with the punches and laugh at herself. She and her sister were driving home from their Outer Banks trip and a man pulled up beside them beeping. She had become almost accustomed to admiring waves from passersby so she thought it was another admirer wanting to give her a cheerful “thumbs up.” He instead shouted out his window that her awning was out and she was dragging something from underneath the trailer. The ‘something’ was her sewer cap and she and her sister Regina had a good laugh at their own expense. She has “smooched” a few trees but the “kisses” have buffed out and now the kids look out the windows and yell when she’s too close to a tree. She and Regina drove all the way home from a trip with a steady alarm beeping every few seconds because, despite calls to the dealer on a Sunday morning, they could not figure out what it was for or how to turn it off. Driving down the highway in a huge motorhome with four kids and a steady alarm ringing for a few hundred miles would make anyone consider mutiny, but it only made Danielle and Regina laugh harder thinking they were going to be pulled over at any moment and charged with “theft of a motorhome.”

The learning curve has been steep and Danielle says in the four years since she bought the first Type C that started her adventures, she has only taken two trips in which she didn’t have to call her dealer. None of the misadventures have made her consider throwing in the towel though. She feels as if she is just hitting her stride. Her husband recently asked if they could find a weekend to get away in the camper without the kids. She doesn’t think she’ll ever get him to give up hotel life but she knows if he gets to ”burn wood” at the campsite, he’ll be a happy camper. In the meantime Danielle, Regina and all the kids are planning moments, miles and memories that will live on in the future generations of this big family of big love and big RVs. 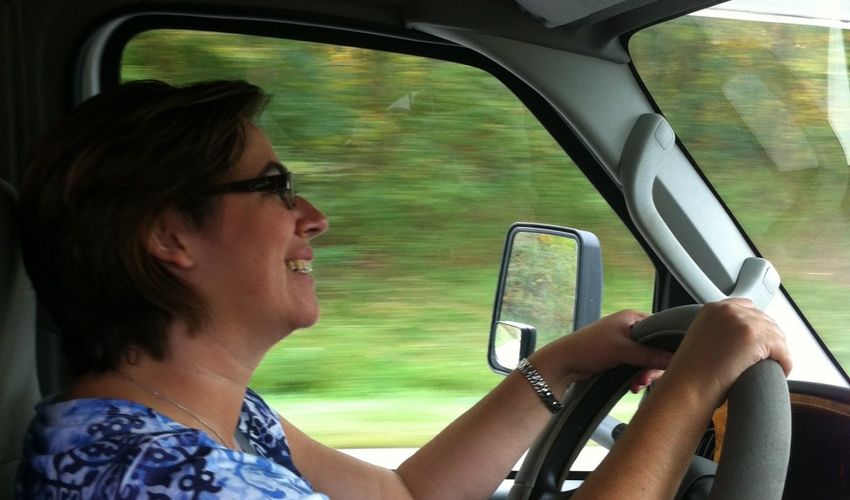 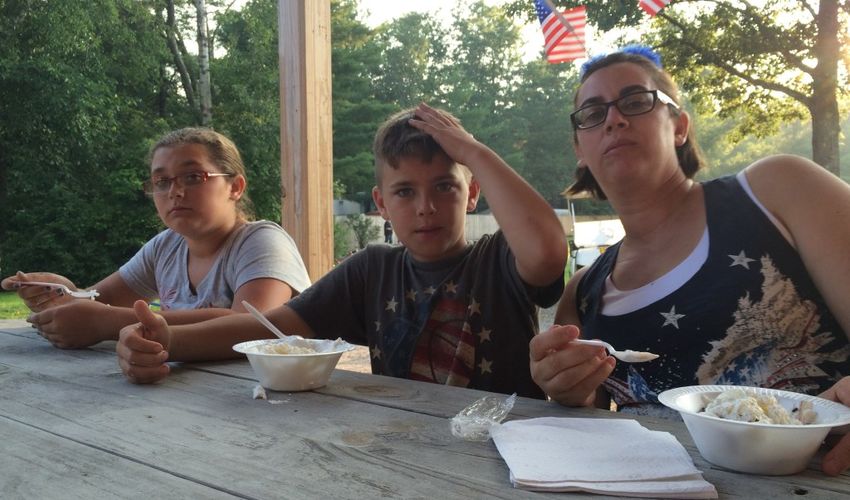 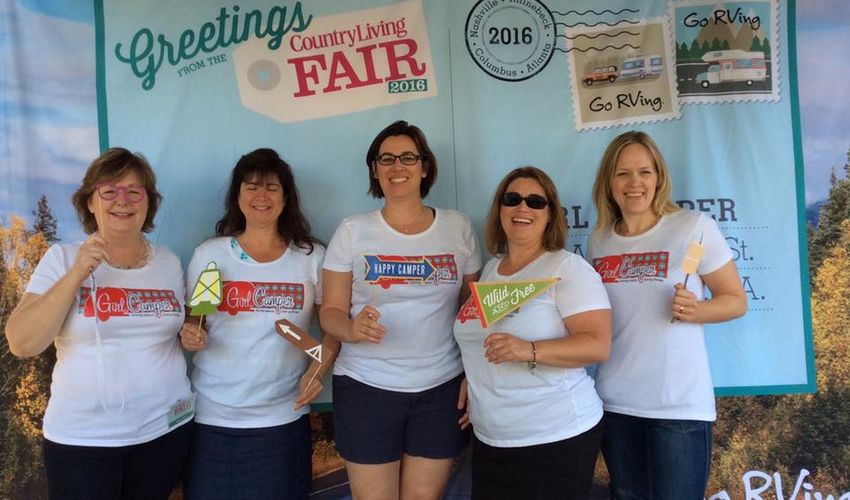 Janine Pettit is a lifelong lover of camping who took a 25 year sabbatical when she married a “resort” type guy! She discovered that camping was still in the cards for her when she stumbled onto an article about a women’s outdoor adventure group that travels around the country in RVs, meeting new friends, checking off bucket list adventures and doing things she had only dreamed of. Janine has become an Ambassador for the Girl Camping movement and encourages women to go places and do things in her blog and podcast.